A Bandwidth Profile (BWP) enforces limits on bandwidth utilization according to the Service Level Specification (SLS) that has been agreed upon by the Subscriber and the Service Provider as part of the Service Level Agreement (SLA). It can be thought of as enforcing the long term average guaranteed bandwidth (CIR) and excess bandwidth (EIR) allowed by the service.

CIR (Committed Information Rate) is the bit rate for which the SP provides performance guarantees in terms of performance attributes for the service.

EIR (Excess Information Rate) is the additional bit-rate that the subscriber can utilize and for which traffic can probably pass through the CEN as long as there is no congestion.

Note that the total rate, sometimes known as PIR (Peak Information Rate), is the sum of CIR and EIR.

Frames within the CIR / CBS compliance level. These frames are subject to the SLS.

Frames exceeding the CIR/CBS but are within the EIR/EBS. These frames are delivered as "best effort" without being subject to the SLS. The CEN may drop some or all of these frames based on congestion conditions in the network.

Frames that do not conform to either the CIR/CBS or the EIR/EBS are dropped.

Bandwidth Profile can be applied:-

There are two types of bandwidth profiles:

The MEF bandwidth profile is a two rate, three color marker (trTCM) that modeled using a dual token bucket algorithm. One bucket, referred to as the ‘Committed' or ‘C' bucket, is used to determine CIR-conformant, in-profile Service Frames while a second bucket, referred to as the ‘Excess' or ‘E' bucket, is used to determine EIR-conformant, excess Service Frames.

Each token bucket is a bucket of byte ‘tokens'. Initially, each token bucket is full of tokens. Each bucket can hold the allowed burst size, CBS, for the Committed bucket and EBS for the Excess bucket. The buckets are refilled by adding tokens at the respective rates (CIR/8 for the Committed bucket and EIR/8 for the Excess bucket). When a bucket is full, no additional tokens are added (but see the discussion about CF below). 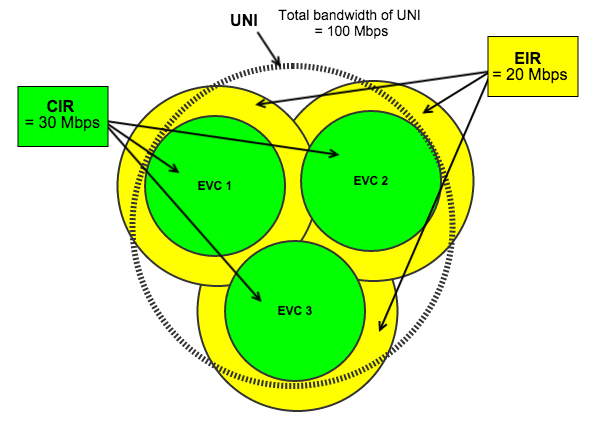 The subscriber is guaranteed 30 Mbps per service. The sum of CIRs must be <= UNI speed. However, the Subscriber cannot use the excess bandwidth simultaneously for the 3 services, or else the Subscriber would be trying to send 150 Mbps over a 100 Mbps link. 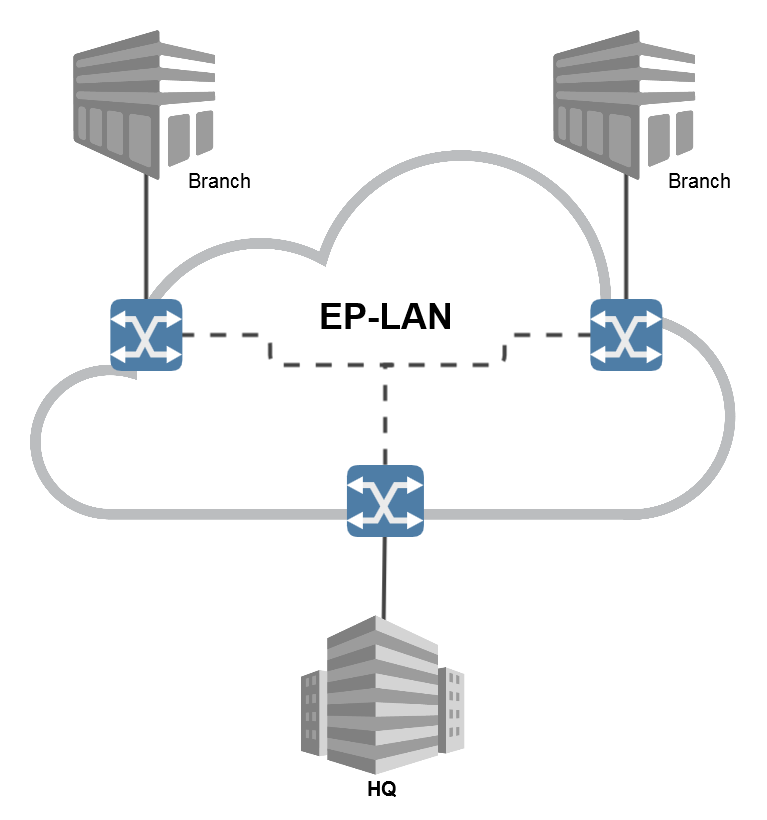 Frames are marked with their color so that subsequent components of the carrier network can know how to handle them. Although there are several ways to mark the frames, the most common are:

The bandwidth profile has two additional parameters, the Color Mode, CM, and the Coupling Flag, CF.

The Color Mode can have values color-blind and color-aware. The color mode is relevant only if the frame has traversed another policer before this one. In color-blind mode, each frame starts green and is then marked only according to operation of this policer. In color-aware mode, the color marking of the previous policer is the starting point for this frame—an incoming green frame can be green, yellow, or red, but an incoming yellow frame can only be yellow or red.

The Coupling Flag indicates whether tokens that would overflow the C-bucket should be added to the E-bucket. If CF=1, then a token that would overflow the C-bucket (i.e. a token that would be added except that the C-bucket is full) is, in effect, added to the E-bucket (unless it is full). If CF=0 then this doesn't happen. CF has a negligible effect when the policing is color-blind. When CF=1 and when operating in color-aware mode, more yellow Service Frames are allowed into the service provider's network.

The diagram at the right shows the dynamics of the token buckets. The buckets start full. Then there is a burst of six frames at a high rate. The first two frames can be taken from the C-bucket so they are green. The C-bucket doesn't have enough tokens for frame 3 so it is taken from the yellow bucket (and marked yellow). Frame 4 can be taken from the green bucket but frame 5 is taken from the yellow bucket. There aren't enough tokens in either bucket for frame 6, so it is red and discarded. At the end of the burst, both buckets are heavily depleted–although not quite as much as shown since they are being refreshed while these frames were coming in (but the assumption in this example is that the frames are coming in much faster than the buckets are being refreshed).

Effect of Each Parameter Setting

Setting the appropriate values for CIR and EIR is often relatively easy. Since CIR is a guaranteed bandwidth it should (usually) be set to exactly the agreed value or a little more. For example, if a customer contracts for 20 Mbps guaranteed service with it may be wiser to set CIR to be 21 or 22 Mbps to avoid occasional slips. Since EIR is a best efforts value, it can be set to the agreed on value.

Setting the burst size is a bit more complicated. The requirements of the application must be taken into account. For non-bursty traffic such as circuit emulation and other traffic that needs low frame delay variation, smaller burst sizes are appropriate (maybe 2*Maximum Frame Size. For TCP/IP traffic, TCP windowing creates larger bursts, so a larger burst size is needed to achieve reasonable throughput. Note that CBS and EBS must be at least as large as the maximum frame size (MFS).

There are two special cases:

Consider an enterprise with 3 locations: An HQ and 2 branch offices as shown in figure 1 at right.

If the enterprise would like specific delay guarantees to its VoIP application, then the SP may offer 2 CoS ID, letting the CE perform the priority marking. The VoIP service is assumed to require 10 Mbps. High marked with PCP=5 and Low marked with PCP=0. All other PCP values could be blocked.

Now two ingress BWPs should be set - one per each CoS ID.